Christian Grey is soooooooooooo last year and there is a new fictional man stealing the hearts of women everywhere.  His name is Jamie.  James Alexander Malcolm MacKenzie Fraser to be precise.

For those of you not in the know he is the lead male character from Diana Gabaldon's 'Outlander' series of books and more recently, the Starz screen adaptation of the series.

My mum has been recommending the books to me for years but it just didn't sound like 'my type of thing' because there is an element of fantasy to it [fantasy, sci-fi... my brain just can't comprehend it].  As with the books she encouraged me regularly to watch the series so one night the wifey and I decided we would give it a go.  I don't know that either of us had great expectations for the show but I have learnt my mum is usually right [about everything...] so we settled on the couch to watch.

From episode one we were hooked.  Yes, the story was pretty great, but what really caught our eye was the deliciousness that is Jamie Fraser.  Yeap.  Intense, cheeky, sweet, funny, loveable, and just plain ol' HOT.

Going too much into just why Jamie is the all-around perfect man would probably give away too much about the story for those of you who haven't read the books or seen the series (if you haven't, GO WATCH IT NOW!), so because this is a blog with a strong sexual base, I thought I would discuss another reason we love Outlander.

I know I said I didn't want to spoil too much, so if you'd prefer not to read about the sex, then stop reading now.

You have been warned.

Had I been eating or drinking something during a particular part of episode six I likely would have choked on whatever was in my mouth at the time.  Jamie, hot, brooding, cheeky [and let's face it, utterly fuckable] tells Claire that he is a virgin.  I know!  Hold up.  WHAT DID YOU JUST SAY JAMES ALEXANDER MALCOLM MacKENZIE FRASER?! 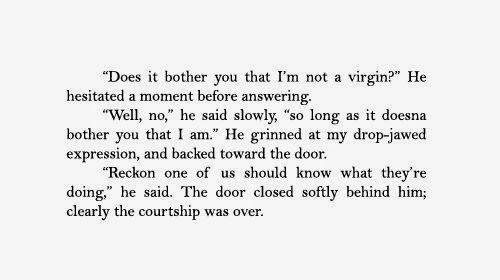 Something about Jamie being a virgin made him even more appealing, I think it gave him an added sense of vulnerability.  There he was.  Sexy as hell and a virgin.  It did not compute!  I cannot think of any other show where such a strong male lead is a virgin, and let's face it - he owns it!  The naughty little smile when he tells Claire that one of them should know what they are doing, you can tell he wants to be taught, he wants to be shown, that he wants to be at the mercy of this one woman.

Who doesn't want someone to feel that way about them?

The virginity admission really set the scene for the sex that was to come in the next episode.  Yes dear readers, if you can't be assed watching Outlander just skip straight to episode 7 and enjoy the naughty delights within. 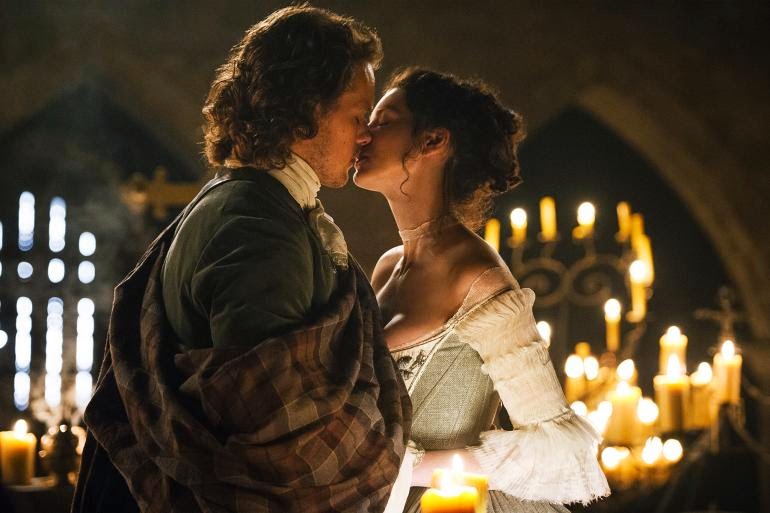 Normally on-screen sex is all ass moving up and down, the woman moaning and crying out from the second the man enters her, she grips at the sheets and within thirty seconds both of them are a spent heap of sweaty flesh with all of their good parts strategically hidden by sheets, limbs, vases of flowers, shadows, etc, etc, etc.

The first time Claire and Jamie have sex is A W K W A R D.  First of all Jamie doesn't realise that a man and a woman can have sex face to face.  No, he thinks that humanoid sex is like four-legged animal sex and attempts to take her from behind.  Claire, ever the patient teacher she is leads him to the bed and pulls him down on top of her.

It is then that Jamie becomes a man.  For a brief period of time.  Yeap, unlike the usual on-screen sex
scene it is all over very quickly for James Alex.... Jamie, and also unlike the usual on-screen sex scenes Claire doesn't writhe around beneath him with a look of ecstasy permanently painted on her face and there is no grand operatic type orgasm.  Don't get me wrong, she was hardly writing her shopping list in her head, but rather than being over the top with orgasmness (yes, that is a word, or it is now), her response was REALISTIC.

Clearly it felt good and you could see she was enjoying it, BUT she also looked like a woman having sex with her new man for the first time... their parts fit well together, but it was more introduction sex than let's scream the house down sex.

[and yes, now I find myself imagining a penis and vagina introducing themselves to each other and making awkward small talk... 'nice weather we are having', 'a bit wet today'...]

Part of what any audience wants is to feel as if they have something in common with a character, that they can sympathise with a character, smile and nod as they remember themselves in a similar situation or feeling a similar way.  With the good-but-not-great first time sex I think this is accomplished.

Throughout the whole seventh episode I felt almost giddy with nerves and anticipation, almost as if I was feeling everything Jamie and Claire were feeling! 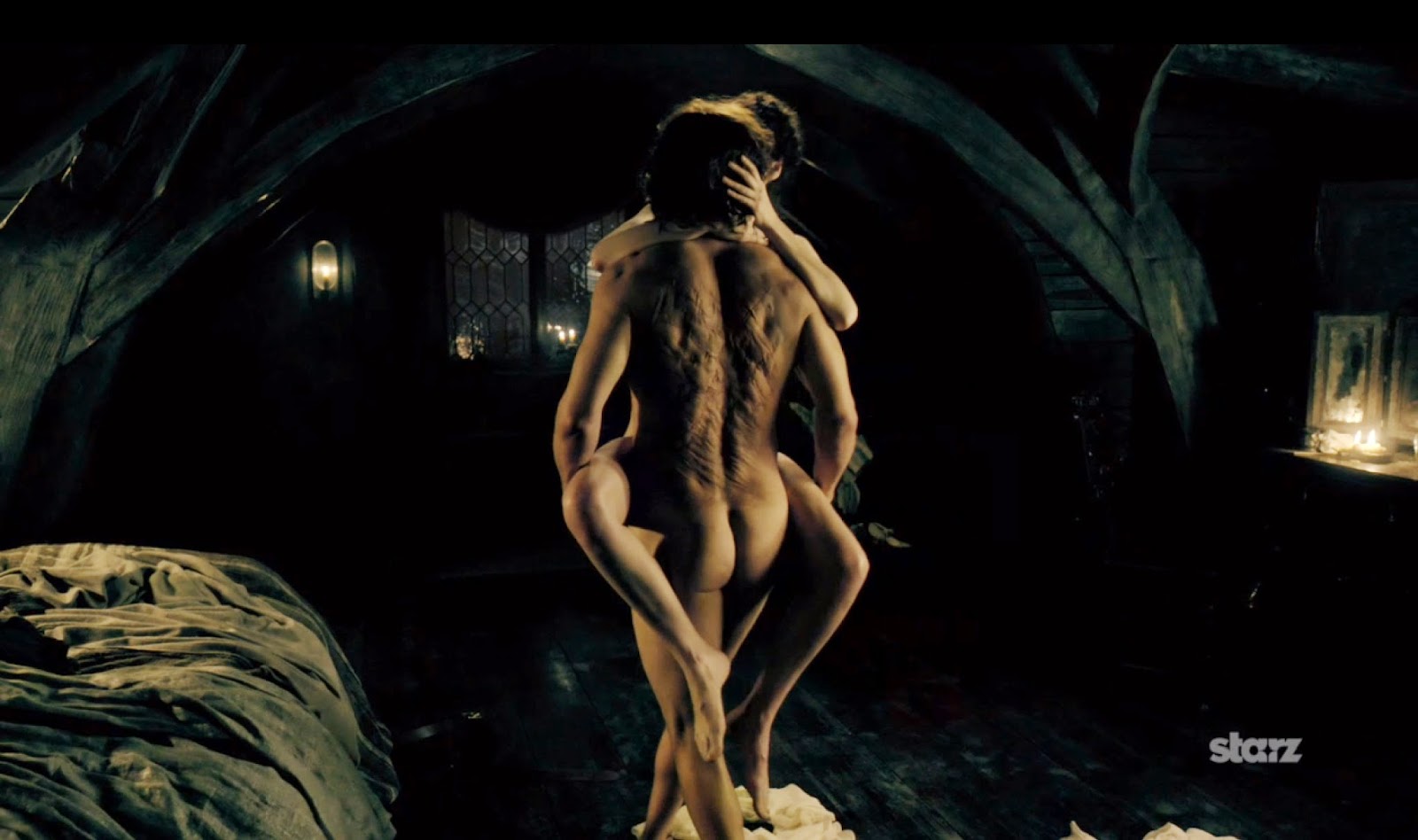 As the episode progresses Jamie and Claire talk and get to know each other better, you can see them feeling more comfortable with each other and just know there is going to be a rather climactic climax to the episode.  And there was.  Oh yes, oh yes, OH YES.

The second time they have sex one gets the impression that James Alexander Malcolm MacKenzie Fraser is indeed a very fast learner.  They were standing before each other and my wife and I were both yelling at him to pick her up.  Pick her up he did!

Her legs wrapped around his waist, he walked her to the bed, lay her down and they went on to have sex that was very arousing to watch.  Hips were bucking, faces were contorted in pleasure, her legs were pulled up toward her chest, her hands were gripping his ass [and what an ass!!!], his back, his shoulders.  A particularly fall-even-more-in-love-with-Jamie thing happened when Claire was crying out with pleasure and Jamie stopped to ask if he was hurting her.  HELL NO, GET BACK TO IT LAD! 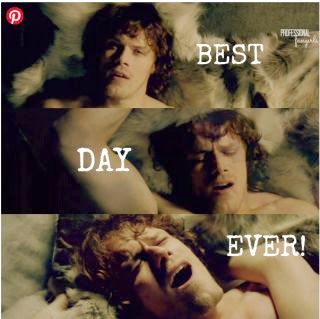 Then Claire blew Jamie's mind (uhhhh literally) and gave him a blow job.  The camera stayed on Jamie's face and I have to say, that man is a sublime actor.  His facial expressions were so authentic I had to wonder for a minute if she really was having some fun down there.  Of course she wasn't, but wow, the look on his face when she had finished was complete and utter overwhelmed bliss and amazement.  Again it was impossible not to fall a little more in love with Mr Fraser.

He then looked at Claire as if she was a goddess and he worshipped her.

In the following episode the two love birds fool around in the grass and partake in some sex al fresco
(briefly anyway.... I shan't give away spoilers about what happens after the sex).  Before they get down to it Jamie very casually exposes one of Claire's breasts and sucks on her nipple - a look of 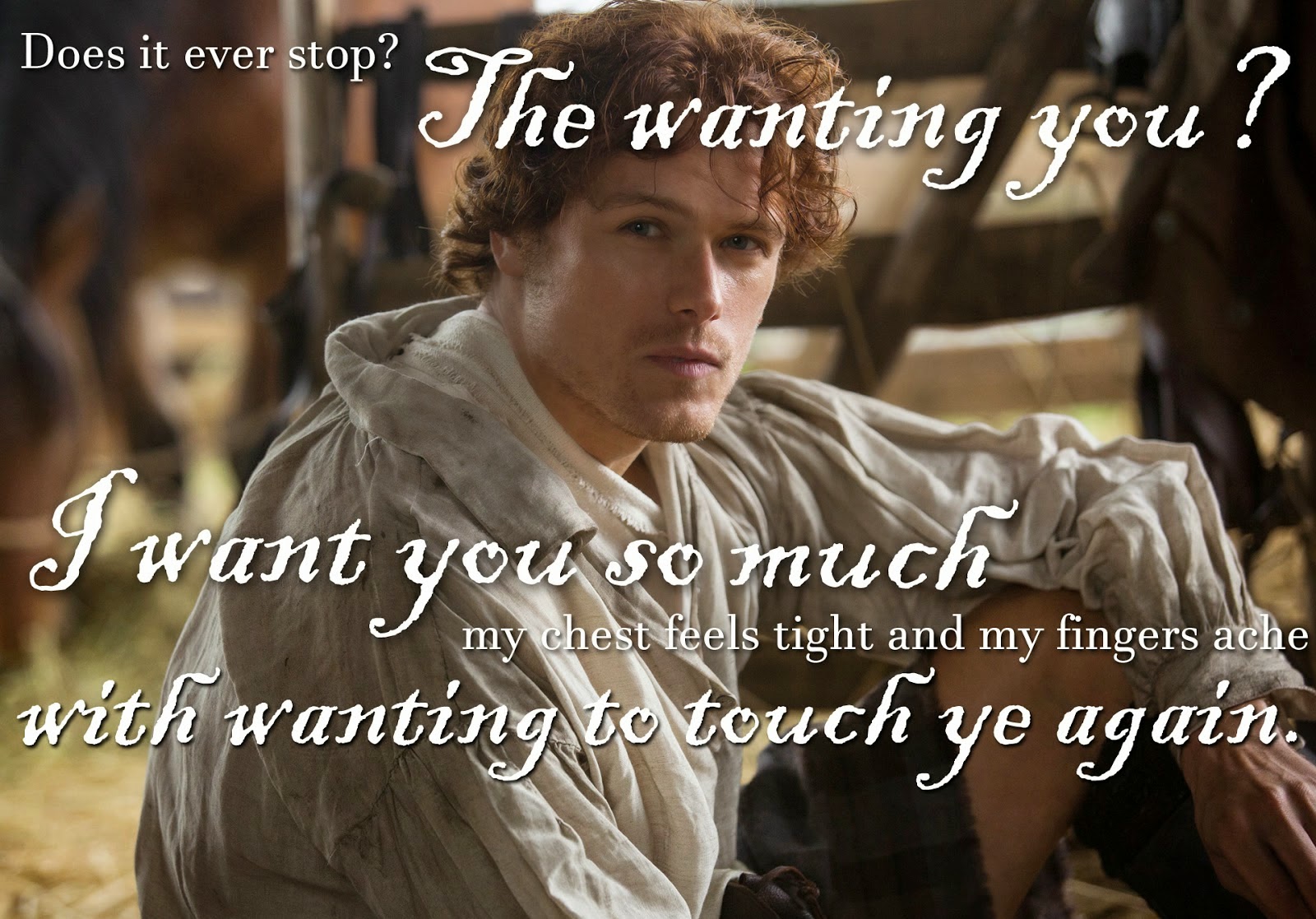 relief crosses his face as he does so - you can just tell he has been wanting to do it since the last time he had a chance to be naked and naughty with her.  The sex that ensues is full of haste and hunger and need and slow, deep rocking of hips that caused me as a viewer to bite my thumb and whimper quietly.  It's okay, my wife was doing the same thing.

If you listen carefully you can hear women around the world sobbing, wondering how they are going to make it through the next six months. 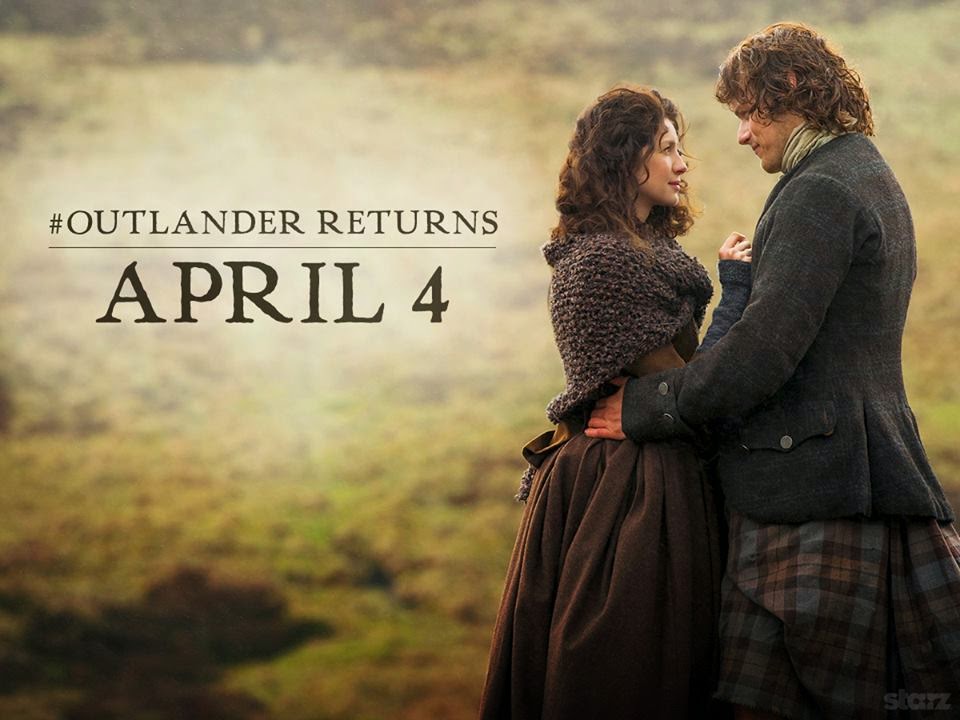