I am naughty.
Dreadfully naughty.

I have an assignment due at midnight tonight and have been putting it off for weeks.  This morning I went into our room to finally get onto it and managed to work for a couple of hours.

Then I began writing. 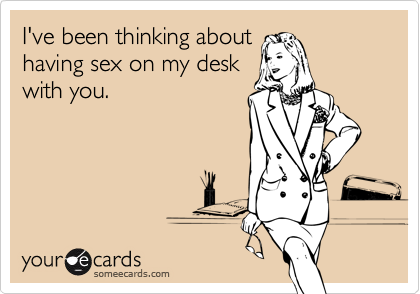 'Coast is clear' came the text message they had been excitedly waiting for. Stella winked at Carly and without a word between them they stood up and walked through the door declaring 'Management Only'. Down the hall they walked until they finally found the door that had been left open by Brad's boss when he'd left for lunch minutes earlier.

Crossing the threshold into the office Stella and Carly were greeted by their boyfriend sitting behind his boss's desk with his suit jacket off and the sleeves of his crisp white shirt rolled up to the elbows. He shot both women a heated look and as they approached him Stella and Carly began unbuttoning their shirts, putting on display their matching fire engine red lacy bras, purchased earlier that morning specifically for their lunchtime rendez-vous.

Stella wasn't surprised to see a prominent bulge in Brad's dress pants and while Carly positioned herself on the desk Stella made speedy work of Brad's pants, gripping his rock hard cock in her hand when it was freed from the confines of his boxers.

Brad groaned loudly but Stella wasn't sure if it was related to her hand or the sight of Carly lying on his boss's desk with her legs splayed open, her pussy glistening with wetness, very ready for what was to come.

Stella turned with her back to Brad and stifled a whimper when she felt the back of her flowing skirt being pulled up, baring her bare ass to Brad. Carly gave her a flustered smile and Stella bent at the waist, taking a long, slow swipe up Carly's pussy, at the same time as Brad pressed the swollen tip of his cock against her own hole. Stella's hands went to Carly's hips as Brad's went to hers and the three of them moaned with pleasure as Brad pushed inside Stella and Stella started hungrily lapping at Carly's pussy.

Luckily they were the only ones in the building because the volume of Stella's moans, Carly's cries and Brad's groans was stuck on high, a dead giveaway of the pleasure being given and received in the modestly sized office.

Carly tasted like bliss on her tongue and Brad's cock was hitting all the right spots. It was too much for Stella to handle any longer and when her orgasm was seconds from hitting Carly came with a loud scream. Her hips arched off the desk as Stella licked furiously at her clit. Before Carly came down Stella felt her own orgasm hit and gripped onto the desk so she wouldn't collapse. Brad came with a roar, pulling her roughly back against him as he gave one final thrust into her swollen, saturated pussy.

The cries, moans and groans were replaced by the sound of gasps for air as the trio tried to catch their breath and gain enough energy to move from their current position.

Stella felt Brad's cock slip from her pussy and whimpered quietly as she straightened up, the back of her skirt coming down and covering her ass. Carly sat up and got off the desk then took some tissues from the box beside the pen caddy and got rid of the evidence of her arousal from the top of the desk.

“Better get to my 1pm appointment,” Brad said in a business-like manner as he zipped up his pants.
“See you at home tonight,” Stella said kissing him on the cheek and rubbing off a smudge of lipstick with her thumb.
“Don't forget the dry cleaning,” Carly added after she had kissed him.
“Bye, you gorgeous women,” Brad said sweetly as they left the office.
“Bye, baby!” Stella and Carly called in unison as they walked hand-in-hand in the opposite direction as Brad.
Posted by Unknown at 3:37 pm