I try to insert my own thoughts into my blog, even if it is possibly not as often as I should.  Since I began embracing the erotica-author side of myself, my eyes have been opened to a whole new world. 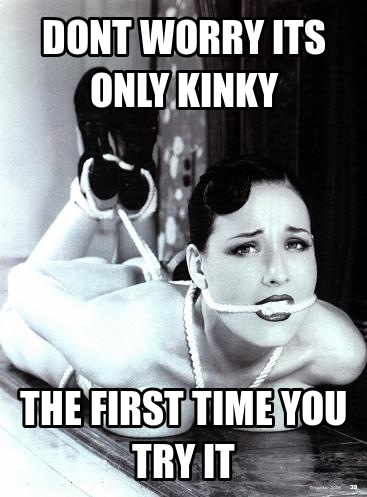 These women are just like me, and do not fill the pre-conceived notion I had of the 'type of woman' who would 'be into that'... some of these women are the loveliest, sweetest, most intelligent women I have ever had the pleasure of meeting.  During all my discussions, there has been one constant, ONE factor which has been the same for all of them, regardless of what gets them off, regardless of the configuration of their relationship, regardless of the type of their relationship.

All of them have mentioned TRUST.

They trust the person/s they are in a relationship with.  They may call their boyfriend/husband/lover 'master', they may have three boyfriends, they may be submissive in the bedroom (or you know, the kitchen, the bathroom, the backyard, the secluded area in a very public place), they may be any number of things, but whatever the relationship dynamic, they have TRUST in the other person/s.

It got me thinking about my own life and the various situations I have found myself in.  I had the most deathly boring sex life with two of my exes, who I see now I was with for the wrong reasons.  I was with them simply because I wanted a boyfriend.  We had sex, it was very vanilla... we both got what we needed, but that was as far as it went.

In between those men, I found myself in a sexually abusive relationship, he forced me to be the submissive to his dominant.  At the time I was in my early 20's, he was closer to 30, and for a start I thought it was great fun... I had never been with a man who was 'a bit kinky', and for a small space of time, I thought that was all it was, a bit of kink.  Looking back now, I can see he is a man that is very much a dominant, but what he did with me went far beyond dominating me.  He was sexually abusive, he was cruel, he was mean, he had no respect for me whatsoever, and though he said he loved me, I know he didn't.  I was too weak to say no, to stop him and say 'I don't like this'... on the few occasions I did say no, or ask him to stop whatever it was he was doing, he would tell me that NO, he would not stop.  I was his 'slut', and I had to 'take it'.

I think part of me knew it was wrong, that the relationship wasn't a 'kinky relationship', as I called it to try and justify his behaviour.   In the end it took me six months to finally see the relationship for what it was, and then proceeded to have an emotional breakdown, right there on the spot.

I briefly, STUPIDLY let him back into my life for a month, three years ago, and in that month I realised he hadn't changed, that when he said he 'missed me', what he really meant was 'I am single, I need someone to control and hurt'.  Thank goodness I was wise enough to realise that I was a fucking idiot for letting him back in, and then closed the door on him for good.

Turned out those relationships weren't very satisfying for me... not emotionally or mentally anyway. 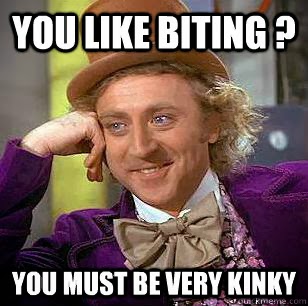 THEN I met my wife, my wonderful, beautiful, amazing wife... and over time, my outlook changed.  It didn't take long after we met (and were friends, nothing more) that we started talking about sex, and various fantasies.  I explained about my abusive relationship, and that any form of kink had been ruined for me, forever.  I was destined to a life of purely vanilla sex, I was sure.

Fast forward about 2 1/2 years... I am now married to that wonderful woman, and we enjoy a sex life full of kink.  Because I know some of our friends will be reading this post, I won't go into specifics, but let's just say, vanilla is only an ice cream flavour in this house!

WHAT made kink okay again?  Why do I get so incredibly turned on by certain things my wife does to me, that a few years ago would have terrified me?

If I didn't trust her, there is no way I would be living out my naughtiest fantasies right now.  When we enter our little world of kink (not that it is very extreme!), we have fun, we enjoy it, we RESPECT each other... we are equals, I feel safe, and further, I feel loved.

I guess that is the moral of this little story... who gives a fuck what others do in the privacy of their own home (or secluded public space), as long as they have trust and respect?  I am sure there are 'straight' 'vanilla' couples out there who treat each other like shit, and then judge those with 'alternative' sexual lifestyles, and in that case, who is worse off?  The woman with 3 boyfriends who all love and respect her, or the woman who can't trust her husband, who treats her like a maid?

Email ThisBlogThis!Share to TwitterShare to FacebookShare to Pinterest
Labels: #AdultSexEdMonth, happiness, kinks, musings, relationships, respect, who I am